June 07, 2020
In 2016, I saw my grandfather alive for the last time. I called him 'Poppa'. We were living just outside Brisbane and he was living in an aged care facility in George's Hall, NSW. For weeks, I had said to my husband, "I need to go and see Poppa. It's like a smoke alarm going off in my head. I need to see him. God is trying to tell me something. This is important."  I had been keeping in regular touch with him by phone and letters, though this time, I was sure I was being told I needed to see him in person. Money was tight for us at the time. We didn't know how we would afford it. We trusted God to provide and agreed I should go. So, I booked a flight to see him only to be told that he had been admitted to hospital the day before I arrived, if I remember correctly now. He couldn't breathe. He had really bad pneumonia - something that was happening regularly to him, at that time.

He started crying when he saw me. Telling me his body didn't work any more. Nearly 100 years old. "I can't walk any more," he said. I said, "That doesn't matter Poppa. God will give you a new body one day soon. At least your mind still works. At least you can still read God's word and pray and talk to God. Some people loose their minds and start thinking there is no God who loves them. You know that. It is better to have a broken body and know Jesus Christ than have a fit body and not know Him." He smiled. He knew I was right.

I sat there all day. I talked. He listened. He couldn't really say much. His strength was nearly gone. Me, honourably loving my last living grandfather. He, honourably loving his eldest granddaughter. We'd always been close. Didn't matter that we lived 1000 km apart. He died about 4 days later. Went into a coma the day after I saw him, if I remember correctly. God knew. He knew I needed to say good bye. He knew I needed to say the things that needed to be said between us. Always say what needs to be said, each time. You don't know if you will ever get another opportunity. My friend Deidre taught me that, when my mum was sick.

Leonard Reuben Trivett was his name. Born in Campsie. His father was Reuben Simeon. Both cobblers. I've had lots of lectures over the years about the importance of good shoes from him. He made boots for the Australian army during the war. His mother died at 16. Elsie his step-mother raised him after that. I never met them. When he married my Nanna in 1941, he told me she was fired from her job, because she had become married. He said that was really, really hard for them financially. Later that year he was called up to the Australian army but was discharged after only a few months. That was God-honouring of them. Thank you. Newly married men don't go to war. (Deut 20.) Poppa was blessed with the birth of his first daughter shortly after that. God blessed him. It was not a curse for Nana to loose her job. You know his first house only cost $30,000! That was Sydney back then. Talk about inflation. 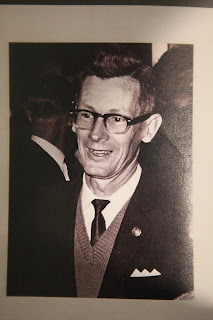 My mother was the one of his three daughters. No sons. My mother died in 2011. Poppa and Nanna missed her funeral. Their plane to Brisbane for the funeral was cancelled. That airline was known for being unreliable. My mum's sister missed the funeral too. She was journeying with them on the same plane to Brisbane. Three of them left on the tarmac. That was so hard for us. I found out moments before Mum's funeral started that my grandparents and aunt were not going to be there. You know what that feels like? To have family missing from a funeral when they should have been there? When they wanted to be there? Not having them there for my Mother's funeral...deep pain. Never flew that airline again. Never dyed my hair after that day either. My husband Mark and I agreed it was a waste of God's money. God's word says grey hair is a good thing. It is the splendour of the old. No need to pretend. Poppa died with a thick head of very, grey spiky hair. 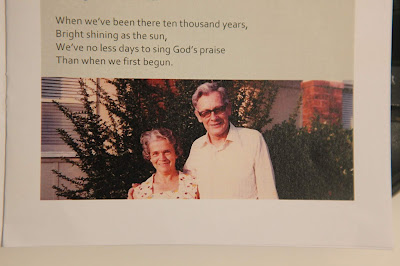 I know what my grandfather’s Bible looks like. Considering I’ve lived over the border since I was 4 years old, I think that is significant.

How do I know?

Because I have a strong memory of him reading it often. It was always sitting on the breakfast table near his bowl of salted, oatmeal porridge, ready for his morning reading and prayer time.
It was always there when I visited and it was always there when he visited us.
My Poppa personified “Your word is a lamp to my feet and a light to my path”.
He lived it.
He let it pervade every aspect of his life.
He was such a man of prayer. Always praying. Always at the prayer meetings. Seeking His God's face.

One day in my thirties, I challenged him on a topic.
Proudly I sprouted my foolish, modern, feministic view on life. Poppa was sitting at our family’s kitchen table in north Brisbane.
He told me my view wasn’t biblical.
I scoffed.
He explained truths.
I still remember that conversation clearly.
He knew how to defend the word of God.
He knew what it said.
It changed me.

Another day, whilst visiting in Gosford, Poppa and I went for a walk to buy stamps at the post office.

Although just a few meters up the road from their villa, this was no quick jaunt.

First he took time to greet the older man in the street and hear his news.

Next he spent time cheering up the miserable post office lady with one of his many jokes.

Then on the way back, he chatted for several minutes to another man about the LORD.

I haven’t even mentioned yet all the other people along the way that he cheered by smiling, waving or nodding to.

Every one around seemed to know him or be known by him in some little way. If you knew my Poppa, you know what I am saying is true. He cared about others. He took time to talk and listen to their needs. He put others before himself. He definitely loved his neighbour. He definitely loved Jesus Christ, his saviour.

I over heard someone once say Poppa talked too much.
But they simply didn’t understand.

They didn’t understand the joy you can bring to a stranger’s life by simply being kind, listening to them and taking the time to chat and cheer them up.

Over the years I watched him many times.

I know all the marvellous good he did.

To share the LORD and His love with strangers.

Poppa learned it from Jesus.

From sitting daily at His feet.

My Poppa may no longer be on this earth. but what he taught me remains.

"Soak yourself in the Word of God daily, Sharon."
"Pray often, Sharon."
"Talk to strangers and share God’s love, joy and peace with them, Sharon."
"Cheer them with good jokes, Sharon."
"Smile and wave at them, Sharon."
"Let them know that they are cared for by God, Sharon." 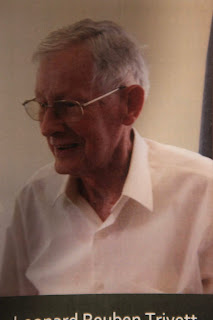 Popular posts from this blog

March 01, 2020
It's been two years now since I was so sick I was close to death. Two long, hard years of rebuilding my body. Let me give you a piece of advice – don't wait till you're nearly dead to change your lifestyle. It's hard and expensive coming back from the dead! Each morning for the last month I have been waking up feeling overwhelmed. Overwhelmed with joy gratefulness thankfulness peace praise for my Jesus for all He has done for me. Yesterday, while at the dentist, I got the icing on the cake, so to speak. Two years ago, when I was very sick, I went to a holistic dentist with a toothache. Following an x-ray, he found a decent sized hole in my back bottom tooth. it was visible on both ex-ray and in the mirror. I asked the dentist if my body could heal it naturally and he said no. I scheduled an appointment for the repair but was unable to do it as I became too unwell. The repair has never been done because the tooth stopped aching and I didn't
Read more

November 27, 2019
In Biblical greek the word pharmacy is translated in the English bible as sorcery. Sorcery is a significant sin and is outside the Kingdom of God or as we would say in Australia - it's not okay. Under the law, sorcery requires the death penalty. Growing up, my generation habitually was raised to fight illnesses with pharmaceuticals including antibiotics and vaccines. However this is strongly warned against in the Bible. Even a cursory read of a pharmaceutical or vaccine insert will assert that there are complications and contraindications, let alone the growing mountain of research and antidotal evidence supporting the worldwide existence of vaccine injury and pharmacology injury, proving once again that God was correct all along, when He warned us to   “Stay away from vaccines. Stay away from drugs,” as we would say these days. 79.4% of babies who died from SIDS had more than 1 vaccine administered on the day they died. That is a significant finding, despite
Read more

August 12, 2019
As I sit here and I write this, I wonder at the response I will get for what I believe God has taught me this week. It's not popular thought by any means around here, yet He has written it on my heart, so to speak, when He cut away the flesh that was there as He promised to do in: Jeremiah 31:33 “I will put my law in their minds  and write it on their hearts.” It all started when I decided to read through the book of 2 Corinthians this week, as my regular bible study group is on a break for school holidays. All was going fairly normal till I reached the end of Chapter 6 and the beginning of Chapter 7. It was there that I felt God floored me. I don't think I'd ever read verse 1 before as it seemed so new to me, yet I must have, for I know for a fact that I have read this book before. I guess that's the way God works. All of a sudden, you see something you have never seen before and then afterwards, you wonder why your whole life you'd missed it. Th
Read more